McCarthyism & his Trip to Nebraska

Across the country, Sen. Joseph R. McCarthy of Wisconsin had become the most vocal hunter of communists within the U.S. government. He was an ambitious politician who seized on the growing fear of communism as his political crusade. 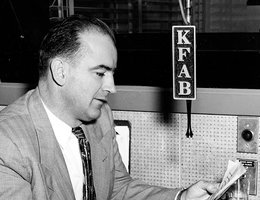 In February, 1950, McCarthy was slated to speak before the Republican Women’s Club in Wheeling, West Virginia. During the weeks before, China had fallen to the communists and Russia had tested an atomic bomb. Two years before, an official in the State Department, Alger Hiss, had been convicted of spying for the Russians, and a scientist on the U.S. atomic bomb project had confessed to giving the Russians atomic secrets. So, McCarthy had a receptive audience when he charged that there were communists within our own government who were working to subvert the U.S. He said:

"Today we are engaged in a final, all-out battle between communistic atheism and Christianity. The modern champions of communism have selected this as the time. And, ladies and gentlemen, the chips are down, they are truly down. . . .

"In my opinion, the [U.S.] State Department, which is one of the most important government departments, is thoroughly infested with Communists. I have in my hand 57 cases of individuals who would appear to be either card-carrying members or certainly loyal to the Communist Party, but who nevertheless are still helping to shape our foreign policy."

Early news stories of the speech reported that McCarthy claimed to have names of 205 communists in the State Department. McCarthy later claimed he said he had 57 names. Whatever the number, the charge got more attention than McCarthy could have hoped for. Newspapers across the country reported his charge that there were communists in the State Department. Later investigation dismissed all of these charges, but by then McCarthy was making new claims.

Two days after the Wheeling speech, McCarthy sent a telegram to President Harry S. Truman demanding that the President identify and fire the 57 communists. "Failure on your part will label the Democratic party of being the bed-fellow of inter-national communism," McCarthy wrote.

Truman wrote, but probably never sent, an angry response to McCarthy. He did go on the record talking to reporters a few days later, when he said bluntly, "I think the greatest asset the Kremlin has is Senator McCarthy." [The Kremlin is the capitol building for the Russian government.] Truman also charged that Republican leaders like Sen. Kenneth Wherry of Nebraska were damaging foreign policy efforts supported by both parties in Congress.

McCarthy brought his anticommunist crusade to Lincoln on August 24, 1951, where he made a nationally broadcast radio speech from the studios of station KFAB. (KFAB started in Lincoln in 1926 and later moved to Omaha.) He continued to charge in the address that Democratic administration officials were either communist sympathizers, members of the American Communist Party, or outright Russian spies. But his methods — claiming to have a list of names, yet never providing hard evidence to back up his charges — had begun to come under fire. McCarthy fired back that anyone who opposed him was a communist. In his Lincoln radio address, he said, "Everyone who hates communism loves McCarthy. Everyone who loves communism hates McCarthy."

The next night, McCarthy spoke to a sparse crowd of less than 500 in Omaha. The Lincoln Star newspaper reported, "Senator Joseph R. McCarthy was in Omaha Monday night bleeding at every vein in his one-man crusade to make the world safe for free men. He said that he alone is the savior of human freedom." On its editorial page, the Star called McCarthy’s visit "August Madness", criticized his charges and methods, and hoped that the American people would not put up with "McCarthyism".

After four years of charges and countercharges, the U.S. Senate eventually condemned McCarthy for abusing his power as a senator. He died three years later of alcohol-related illnesses. But he had given voice to a powerful sense of fear that many Americans felt at the time. Two years before McCarthy’s charges, even President Truman had demanded that government employees sign oaths of loyalty to the U.S. Nationwide, it’s estimated that as many as 12,000 people lost their jobs because of alleged communist associations.