NEXT
Horrors of War: Concentration Camps 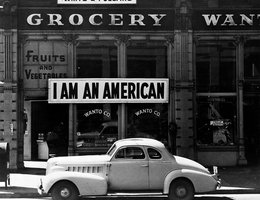 The owner of this Oakland, California store, a University of California graduate of Japanese descent, placed the "I AM AN AMERICAN" sign on his store front on December 8, 1941, the day after Pearl Harbor
Courtesy Library of Congress, LC-USZ62-23602

What is it like to be born and raised an American, but to be considered an enemy because of where your parents were born? That’s what happened to many Japanese Americans in World War II.

Racism and war hysteria motivated the U.S. government to forcibly move more than 120,000 Japanese citizens and Japanese Americans from their homes on the west coast to internment camps between 1942 and 1945. Nebraska’s central location kept its Japanese American citizens comparably safe from this process, although some were restricted from accessing their bank accounts. 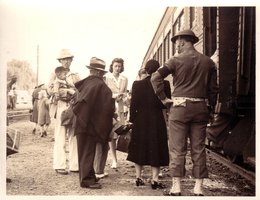 Japanese Americans are inspected as they board a train in Woodland, California bound for a relocation camp in May, 1942
Photographed by Dorothea Lange for the War Relocation Authority. Courtesy National Archives & Records Administration 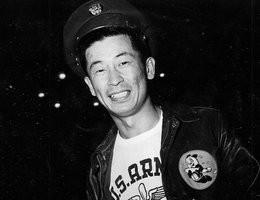 Ben flew on a total of 58 missions as a turret gunner on B-24 and B-29 bombers, and became a Nebraskan War Hero.
From the PBS program Most Honorable Son & an NET Television’s THE WAR: NEBRASKA STORIES interstitial. Courtesy 2007 NET Foundation for TelevisionMost Honorable Son is a production of KDN Films. Co-produced with NET Television and the Independent Television Service. ©2007 KDN Films and NET Foundation for Television. KDN Films is solely responsible for its content. Produced in association with the Center for Asian American Media. 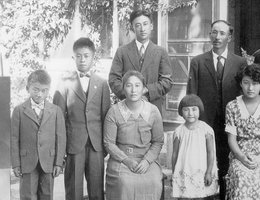 Ben Kuroki was born in Hershey, Nebraska in 1918, where his family grew potatoes. When he heard about the attack on Pearl Harbor, he wanted to join the fight against the Japanese. Ben felt it was his duty to prove his loyalty and love for his native country, the United States. In the military, he faced prejudice and sometimes danger from some of his fellow soldiers. But his crew trusted and relied on Ben, and many others vouched for him as a loyal American. 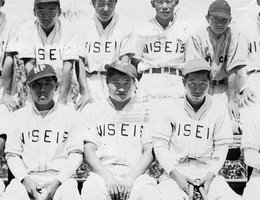 Many Japanese Americans were fond of baseball before the war. On the West Coast, there were organized leagues of Nisei teams.
(Nisei literally means "second generation", but in the U.S. means Americans with immigrant Japanese parents.) Nebraska fielded its own team of Nisei, which included Ben and Fred Kuroki. Both brothers were strong athletes, playing three sports each in high school. Courtesy George Kuroki 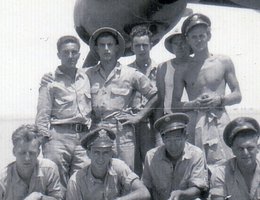 The "Tupelo Lass" crew prior to the Ploesti, Romania raid of August 1, 1943. Second from left, bottom, is pilot Jake Epting. Epting was originally not going to fly, having finished his 25 missions.
Col. Jacob Smart, the architect of the Ploesti attack, was to take Epting’s place. Smart was removed from the flight because he knew of the D-Day plans, which could be at risk if he was captured. Ploesti became Epting’s 26th mission. Courtesy William Hubbard 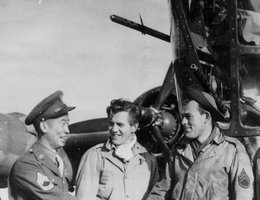 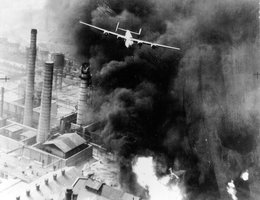 On August 1, 1943, the Army Air Corps attacked the Ploesti, Rumania oil fields, the largest aerial assault ever at that time. While the raid caused significant damage, it was not considered a success because the Air Corps suffered major losses.
Only two of the B-24s from Ben Kuroki’s squadron returned to base. Courtesy Ed Weir 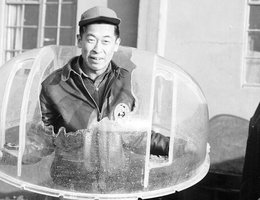 After completing 25 missions, Ben Kuroki volunteered for five more. On his 30th mission over Munster Germany, flack hit his top turret. He lost his oxygen mask and was delirious.
The pilot realized something was wrong when Kuroki’s guns kept firing after the enemy threat had passed. Crewmen had to fight to pull him from his turret. Kuroki was revived and the plane returned to base without incident. Oddly, Ben didn’t get a scratch but check out his turret! Courtesy Ben Kuroki 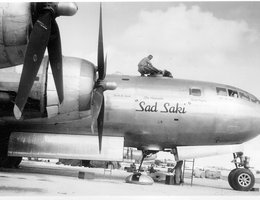 The "Honorable Sad Saki" was a B-29 with the 505th Bomb Group, 484th Bomb Squadron, 20th Air Force, based on Tinian Island in the Pacific. While flying on B-24s in Europe, Kuroki was called "Most Honorable Son".
His nickname in the Pacific was "Sad Saki", a name his crew also gave their plane. "Sad Sack" was a common term for an army recruit. "Saki" referred to Japanese rice wine, which should have been spelled "sake" and pronounced "SAH KAY". Courtesy Jim and Ellenette Jenkins 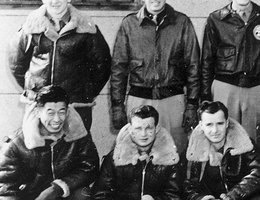 B-29 crew; Ben Kuroki is in the bottom row on the left
Courtesy Jim and Ellenette Jenkins 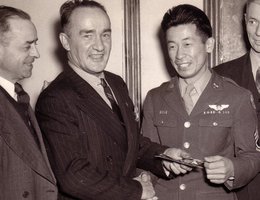 Ben Kuroki is welcomed by Tom Parker into the Veteran of Foreign Wars in Omaha, Nebraska in 1944. Others in photo unidentified. Photo by the War Relocation Authority.
Courtesy Tom Parker & National Archives & Records Administration 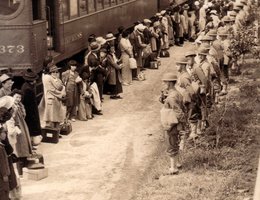 Japanese Americans arriving at Santa Anita by train from San Pedro California April 5, 1942. In his book, "Impounded", Gary Okihiro notes standard procedure was for photographers not to show certain scenes, such as soldiers with bayonets on their guns.
This photo, while censored, does not reveal any bayonets. Courtesy National Archives & Records Administration 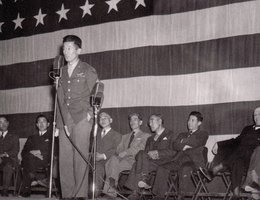 During the war, Ben Kuroki speaks at an event at the Heart Mountain, Wyoming relocation center. Coming from Nebraska as a poor dirt farmer, Kuroki thought he was not cut out for public speaking. Reports of his excellent speaking skills proved otherwise.
War Relocation Authority photo. Courtesy Ben Kuroki & National Archives & Records Administration 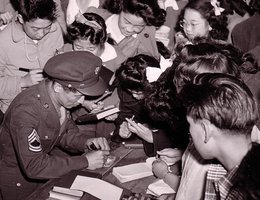 While he was visiting 3 relocation camps (Heart Mountain in Wyoming, Minidoka in Idaho, & Topaz, Utah), Ben Kuroki became a celebrity among the younger Nisei internees, who were as captivated by Air Corps flyers as the rest of America
Some of the older Nisei and immigrant Japanese had far different feelings. War Relocation Authority photo. Courtesy Ben Kuroki & National Archives & Records Administration 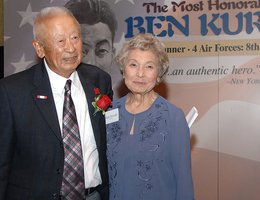 Ben Kuroki and his wife, Shige, with former Nebraska Governor David Heineman on August 1, 2007 at a banquet honoring Ben and promoting the new documentary about Ben, "Most Honorable Son"
Courtesy NET Foundation for Television 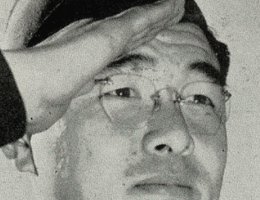 "Lt. Kei Tanahashi, ex ’46, Heart Mountain, Wyoming, a Nisei officer, was killed in Italy in July, 1944. Lt. Tanahashi, mortally wounded while leading his troops in hostile action, died while directing operations against snipers. He wrote ‘when this business is taken care of, we will live together as good Americans.’ "

In 1940, the median age of Nisei (those people born in America, but of Japanese parents) was seventeen. When Japanese Americans had to start selling their belongings to move to the camps, some young Nisei began writing to universities in the heartland. Many universities rejected or forbade them admission. In 1942, the University of Nebraska Board of Regents officially approved admitting "Japanese students" if the FBI cleared the applicants. A quota of no more than 50 students at a time was set and rigidly followed. 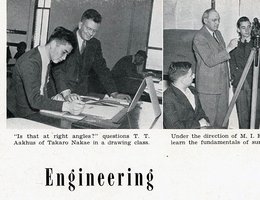 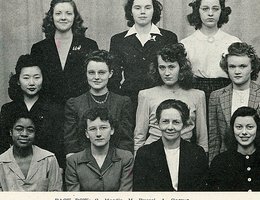 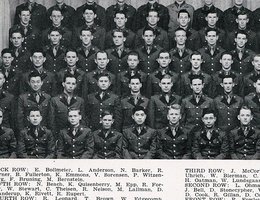 In 1940, the median age of Nisei (those people born in America, but of Japanese parents) was seventeen. When Japanese Americans had to start selling their belongings to move to the camps, some young Nisei began writing to universities in the heartland. Many universities rejected or forbade them admission. In 1942, the University of Nebraska Board of Regents officially approved admitting "Japanese students" if the FBI cleared the applicants. A quota of no more than 50 students at a time was set and rigidly followed.

Many Nisei felt they were treated well in Lincoln. Roy Deguchi told the story of a family who invited him to church, picnics, and their home. On one visit, he learned that their oldest son was on the Pacific front. Their kindness to someone of Japanese descent illustrated what he called, "the Nebraska spirit, a sense of fairness."

Not everyone was happy to have the Japanese American students here. The assistant dean of women, Elsie Ford Piper, vigorously enforced segregation in the women’s dormitories. In 1944, the Board of Regents made that segregation official policy, claiming it would avoid "interracial agitation or interracial questions whenever possible." Although there was some ever present resistance to the Nisei relocation in Nebraska, by the end of the war, the University of Nebraska had welcomed the third largest number of students; only the universities of Utah and Colorado admitted more. 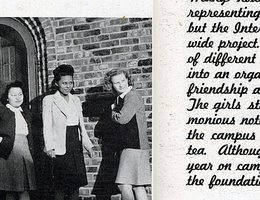 UNL Board of Regents Statement of Policy Re: Inter-racial Social Relations June 17, 1944

NEXT
Horrors of War: Concentration Camps