NEXT
Nebraskans Pitch In

Reactions at Home: War Changes Everything 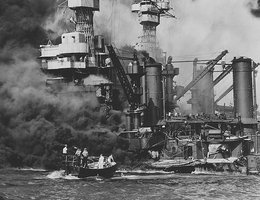 "My Aunt Rose was listening to the radio, and I wasn’t paying much attention until they kept hearing the word ’war’. . . . I had never heard that word before, so finally I got up there and said, ’Well, what is it? What is it?’ They tried to explain to me what war was, and I was appalled! Because up until then, I thought all the grown-ups knew what they were doing, and I could not believe that grown-ups would do this. . . . I lost my faith in the adults real quick."

Rose Marie was very young when the Japanese bombed U.S. ships at Pearl Harbor, Hawaii on December 7, 1941, but her shock and dismay were shared by many Nebraskans. Events had been in motion for quite a while that made most Americans realize it was just a matter of time before the U.S. entered the war.

There was already a war going on in Europe. After Germany invaded the former Soviet Union in June 1941, the United States joined Great Britain, China, the Soviet Union, and several others to become the Allied Powers. We promised aid to the Soviet Union to resist Germany.

Germany was part of the enemy we called the Axis Powers, along with Italy, and later Japan. Together, they signed the Tripartite Pact in 1940, although they mostly fought independent of each other. After the assault on Pearl Harbor, the U.S. joined in combat both to the east and to the west, making the war officially spread around the world.

Follow the rise and fall of both the Axis and Allied powers during World War II in The Spreading War.

NEXT
Nebraskans Pitch In