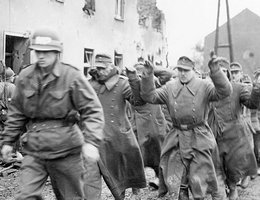 "I remember once in a difficult part of the war that these MPs made the patients (German prisoners of war) think that they were not going to give them food from the carts. . . . I cried and said, ‘Oh, you can’t deprive them.’ This (guard) said, ‘Oh, we’re just kidding.’ But I know they weren’t. They were angry with the Germans."
—Barbara Gier, Seward, NE
Nurse, 203 General Hospital in Paris

World War II lasted over three and a half years for Americans, but much longer for Europeans and Asians. How does one pick up the pieces after such an overwhelming event? Many felt the need for justice. 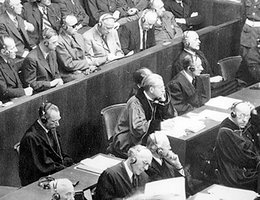 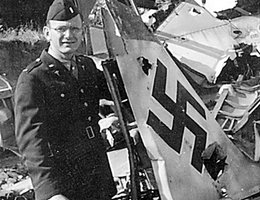 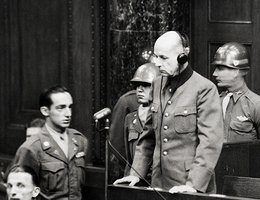 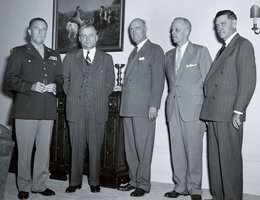 Roy Long and Carlyle Wilson describe their witnessing some of the procedures at Nuremberg
An NET Television’s THE WAR: NEBRASKA STORIES interstitial.
Courtesy 2007 NET Foundation for Television

Several high-ranking German officers and officials were accused of war crimes and went on trial in a special court session in Nuremberg, Germany. These men were the architects of the Holocaust. Of the 22 defendants, 12 were sentenced to death, 7 were imprisoned, and 3 were acquitted. (Japanese war criminals were also tried, and some were executed as well.) Second in command under Hitler, Hermann Göring (spelled Goering in English) committed suicide before he could be hanged.

In addition to the major trials, there were smaller ones that earned the nickname, "baby Nurembergs", although the crimes prosecuted there were in no way as minute as their nickname implies.

These types of tribunals tried military officers whose crimes were not covered by courts martial, for example, military governors of civilian populations. One type of offense was the "100 to 1 Order" — for every German soldier killed by a local population, some of these officials ordered the German military to kill 100 citizens in retaliation.

A member of the Nebraska Supreme Court, Edward F. Carter Sr. from Thayer County, Nebraska was chosen to be one of three judges for the Fifth Military Tribunal. 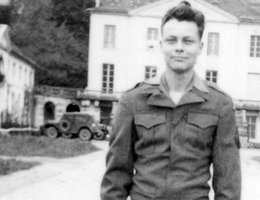 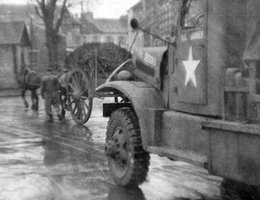 "I remember my grandfather telling me how difficult it was to deal with the scale of things. He said it got to the point that if someone was only responsible for 10,000 deaths, that it seemed like a misdemeanor."

Field Marshal List was charged with the mass murder of hundreds of thousands of southeastern Europeans. Judge Carter helped find him guilty and sentenced him to life imprisonment. In December 1952, List was released for medical reasons.

Even though the war was over, it was difficult for some to let go of all that had happened. For Nebraskan Roger Peters, a chance meeting with German soldiers helped him discover that Forgiveness was necessary in order to move on.
An NET Television’s THE WAR: NEBRASKA STORIES interstitial.
Courtesy 2007 NET Foundation for Television

Crimes like the Holocaust seem unforgivable. It is still debated as to how much the average German knew about what was going on. But an Axis soldier on the battlefield had the same goal as any Allied soldier — to protect his buddies beside him and to win the war for his side. Both groups of service people did what they thought was right, and in battle, both groups killed people from the other side.