Life on the Road

The rationed item that produced the greatest inconvenience was probably gasoline. Each motorist was assigned a windshield sticker with the appropriate letter of priority ranging from "A" to "C". Trucks received a special "T" sticker. Most of the population received low priority "A" stickers, allowing only three to five gallons of gasoline a week. 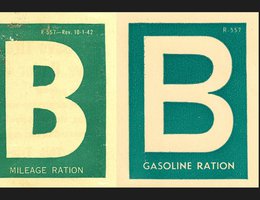 "The speed limit was 35 miles an hour. They set up a regulation, and a lot of local officials enforced that law. They figured that would use the least amount of gasoline and cause the least wear on tires at the slower speed. The panel would stick to that too. If somebody got picked up for speeding for 50 miles an hour and then the next week came in and wanted extra gas, the board would be kind of rough on him." — Fred Merriman, Loup City Chief clerk, Sherman County Rationing Office. 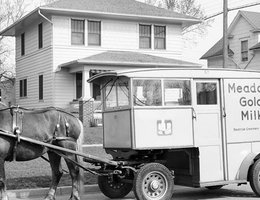 The complicated rationing system attempted to prevent hoarding. Coded stamps were redeemable only for a specified period. Along with ration stamps, the Office of Price Administration issued tokens, or points, which were also used when purchasing rationed items.

"Farmers had a lot of problem[s] getting gasoline for cars — not so much [a problem getting] fuel for their tractors. We used tractor fuel, which was a low grade of gasoline, for our tractors. But it was hard to get enough gasoline for our car to get our supplies and machinery parts. We were only issued a "B" stamp for one car. A "B" stamp, I believe, allowed us seven gallons a week. And we lived out here, which was 14 miles away from Ninth and O [in Lincoln], and several of the implement dealers were right on Tenth street... and we had to go there for parts. A lot of the parts were hard to get. You couldn’t get any new machinery." — Vernon Lostroh, Lincoln Farmer, later U.S. Army Quartermaster Corps, Pacific Theater.