NEXT
Nebraskans Tighten their Belts

USO — Home Away from Home 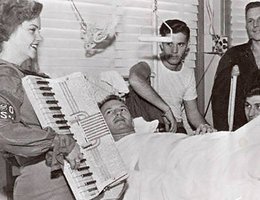 The national United Service Organization (USO) was organized on April 17, 1941. It was created to serve the religious, spiritual, and educational needs of the men and women in the armed forces. USO clubs were to be financed by the public through voluntary contributions.

During the war, volunteers, mostly women, organized USO clubs throughout Nebraska. USO clubs sponsored a variety of activities for service personnel that included dances, sporting events, and dinners in the homes of local families.

The flag of the National War Fund often hung in USO clubs. Because there were so many agencies seeking funds during the war, the government created the National War Fund. It was based on the idea of a Community Chest — consolidating many causes in one large fund drive. To receive funds an agency had to be approved as being essential to the war effort by the president’s War Relief Control Board. The USO received nearly half of the money collected by the National War Fund in 1944.

Locally, the Lincolnettes, an organization of young women from Lincoln, served as partners and hostesses in recreational activities for service men stationed in Lincoln.

And at the large ammunition depot in Hastings, a separate USO club was organized for African American service personnel stationed there. The armed forces in WWII were still racially segregated, and separate clubs were organized across the national and overseas.

NEXT
Nebraskans Tighten their Belts