NEXT
Life on the Road 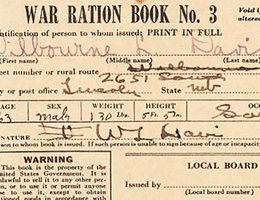 Sometimes rationing brought out the worst in people. Some tried to find ways around rationing.
From the 1980 NET Television program Legacies of World War II, using U.S. government re-enactments from the era. 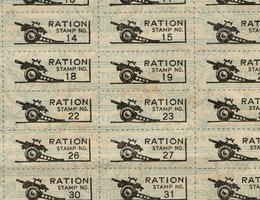 For most Nebraskans, the first sign or the war’s impact was the unprecedented rationing of more than 20 essential items. The first item to be rationed nationwide was sugar, which was soon followed by coffee and shoes. Nebraskans lined up at their local schools, where teachers issued ration books. In combination with price controls, rationing was an attempt to distribute scarce goods equally and control inflation. The Office of Price Administration was created by the federal government to regulate prices on all items to prevent businesses from taking advantage of the consumer.

A popular slogan during those years was:"Use it up, wear it out, make it do, or do without."

Civilians (people who were not in the military) had to do without some products. Rationing was set up to distribute scarce goods fairly. All Nebraskans were issued ration books containing coupons which had to be turned over at the time certain items were purchased. Once you were out of coupons for a certain product, you could not purchase any more. Sugar, coffee, shoes, gasoline, meat, and tires were some of the items rationed.

"There were eight in our family at the start of the war, so we had plenty of ration cards. Dad had an old Model A vehicle and got five gallons of gas a week. Getting tires was impossible... [It] was hard to get shoes, as I remember having holes in the soles, so I put cardboard inside."
— Martin Caffrey, Jr., Grand Island High school student.

Ration boards were set up in every community and were run primarily by volunteers. Each local board decided who should receive goods exceeding the government allowances. Along with ration stamps, the Office of Price Administration (OPA) issued tokens or points which were also used when purchasing scarce goods.

It was up to the consumer to be honest and use the coupons and points when purchasing rationed items. Apparently most Nebraskans did because there was little "black market" activity. One exception involved the butchering of meat by farmers, who sold or gave it to their neighbors with no exchange of coupons or points.

NEXT
Life on the Road