PREVIOUS
Life on the Road 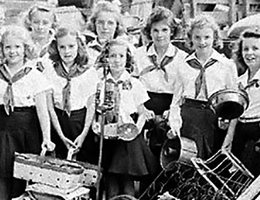 Along with rationing, Nebraskans became well educated in the art of collecting scrap materials. These could be recycled into weapons and other equipment essential to the war effort. Scrap iron was the most obvious choice for collectors. Papers were the easiest to get and were reused for packaging weapons.

Due to the shortage of metals during the war, major appliances were hard to get. There were waiting lists for these scarce items.

PREVIOUS
Life on the Road