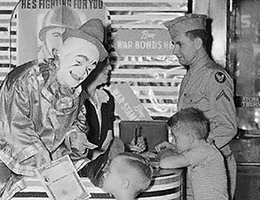 There was a government savings bond program before the second world war began. It was a way for the federal government to borrow from its citizens to help finance the cost of preparing for war. After December 7th, savings bonds became "War Bonds." Individual citizens — even children — were encouraged to buy bonds. Nebraskans responded. Between the attack on Pearl Harbor and 1943, Nebraskans bought $240-million worth of bonds.

The state government also adopted a policy of investing all available funds in War Bonds instead of traditional bank accounts. Companies pitched in. The 900 employees of the Burlington Railroad Havelock shops were recognized for investing more than 10 percent of their earnings in War Bonds. 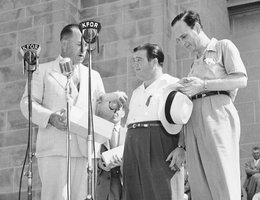 Gov. Dwight Griswold presents Abbott and Costello with an ear of corn as a memento of their trip to Nebraska to help sell war bonds
Courtesy Nebraska State Historical Society, RG2183-1942-0731-4

Hollywood stars — usually seen only on the silver screen or fan magazines — were drawn to Nebraska in the flesh. Some celebrities served in the military in Nebraska, but most stars travelled through the state to help with the War Bond drives. They were also drawn to Nebraska for bond sales and USO shows.

The comedy team of Abbott and Costello performed on the steps of the state capitol building. Technical Sergeant Gene Autry, wearing regulation cowboy boots with his uniform, brought his radio show to the Scottsbluff air base. Betty Grable, the GI pin-up girl, visited a Grand Island theater; Jane Wyman, then Mrs. Ronald Reagan, came to the Lincoln air base hospital; and William "Hopalong Cassidy" Boyd drew crowds to an Omaha bond rally.

The stars found enthusiastic audiences and adoring fans, whose morale and subsequent purchases of war bonds rose appreciably. The lucky Nebraskan might even snare an autograph.