PREVIOUS
On The Home Front 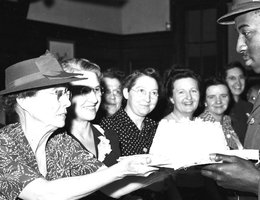 "During World War I the army and navy mothers, or should I say the war mothers, had canteens at our own depot. Why can’t we? . . . I say get back of our sons and other mothers’ sons 100%. Let’s do something and do it in a hurry! We can help this way when we can’t help any other way." — Rae Wilson

She contacted friends, businessmen and civic leaders about her idea. At a meeting on December 22, 1941, a canteen committee was organized with Wilson as chairman. The canteen officially started December 25, 1941. Young women met soldiers traveling through North Platte that Christmas Day and presented them with snacks and small gifts.

The North Platte Canteen existed partly because of the steam locomotive. In the years before Union Pacific switched to using diesel-electric power for its trains, North Platte was a servicing point for the steamers that pulled the passenger trains. A North Platte service stop generally took about ten minutes as UP employees scurried to re-lubricate the locomotive’s large driving wheels and refill its water tender (tank). These tasks allowed those servicemen or women riding the trains to detrain and visit the canteen. (If they were not permitted to detrain, volunteers passed gift baskets through the windows and down the car aisles.)

John Eugene Slattery would literally sell the shirt off his back at livestock and public auctions to raise money for the canteen.
From the 1991 NET Television program All Hell Can’t Stop Us 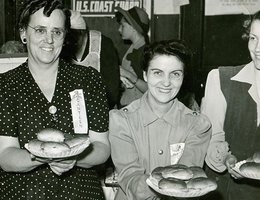 During the early days of World War II, troop movements were considered a military secret. Word about the upcoming arrival of troop trains in North Platte was reportedly given by UP special agents only to head canteen officials. They would alert other volunteers to come to the depot by calling and saying, "I have the coffee on."

At first, canteen workers had to prepare food items in the nearby Cody Hotel and store their treats in a shed near the depot. Rae Wilson then personally approached Union Pacific President William M. Jeffers (who was a native of North Platte) for permission to use the vacant station lunchroom for a canteen center. Jeffers quickly agreed. The workers moved into the lunchroom shortly before January 1, 1942.

At the peak of the war, 3,000 to 5,000 service personnel were provided with food, magazines, and entertainment during their brief stops at the canteen. The canteen was operated entirely by volunteers from about 125 communities in and around the state. Funds were raised from different sources: scrap drives, dances, concerts, movie benefits, and cash donations.

Even decades later, service men and women who had traveled through North Platte remembered and appreciated the efforts of this plains community.

The North Platte Canteen finally closed in April 1946. The Union Pacific station in North Platte was torn down in 1973 when passenger train service ended. However, an historical marker built out of bricks from the old depot now marks the spot and tells the story of the canteen.

PREVIOUS
On The Home Front