PREVIOUS
USO — Home Away from Home 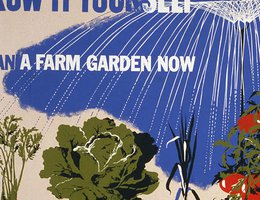 During World War II, there were shortages of many items across the U.S. because certain supplies were needed for the war. Civilians (people who were not in the military) had to do without some products.

Nebraska’s greatest contribution to winning the war was in food production. Even Nebraska families who did not live in rural areas got involved with the nationwide "Victory Garden" program. Nebraskans were encouraged to plant gardens to help ease the food shortage. Almost half of all vegetables grown in the United States in 1943 came from victory gardens. 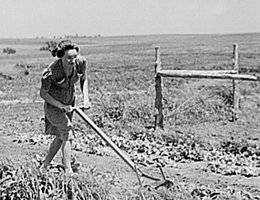 Nebraskans, like the rest of the U.S., were encouraged to support the war effort by eating less, by collecting scrap metal that could be made into bombs, or by car pooling and cutting the amount of gas used. Papers were reused for packaging weapons. "Disposables" such as grease, were used to manufacture explosives and artificial rubber. Leftover food grease was used to make ammunition. Even U.S. coins changed because of the scrap drives. Copper was needed in the war, and pennies made from steel were issued in 1943.

Some studies showed that scrap drives were important because they made people feel that they were helping to fight the war. This feeling might have been more valuable than the actual materials they were saving.

Scrap drives, conservation, and rationing were important parts of the home front effort.
From the 1980 NET Television program Legacies of World War II 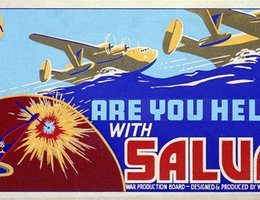 The government also rationed certain items so there would be enough supplies for American troops that were fighting in the war. Ration means that the amount was limited. The government handed out coupons so people could buy only a certain amount of a product. Once you were out of coupons for a certain product, you could not purchase any more. Sugar, coffee, shoes, gasoline, meat, and tires were some of the items rationed. Gasoline was rationed to save gas and tires, because supplies of rubber from the Far East had been cut off. Also, a 35 miles per hour speed limit became law to save rubber. Due to the shortage of metals during the war, major appliances were hard to get. There were waiting lists for these items. But, the government also made businesses limit the prices they charged since some items were so hard to find.

See the following pages for more advanced detail on 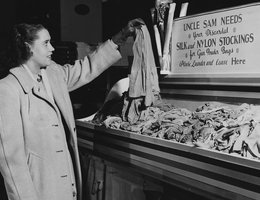 One of the most unusual items affected by the war was women’s stockings. Because the U.S. would no longer buy silk from Japan, nylon was used to make parachutes. Each chute was made from the same amount of nylon that could be used to make 36 pairs of stockings. But, other Nebraskans were more worried about how to protect their feet.

"You got ration points or coupons for a pair of shoes . . . You could get one pair of shoes, and I had to decide whether to get ordinary shoes like oxfords or saddle shoes or something like that or to get these snow boots, because you didn’t know if you would be able to get overshoes. I took the snow boots, but every once in a while I’d say, ‘I wish I’d taken those other shoes.’ Cold days they were fine, but on warmer days they weren’t so great."
— Rose Marie Murphy Christensen

A popular slogan during those years was:

PREVIOUS
USO — Home Away from Home