NEXT
Arsenal for Democracy 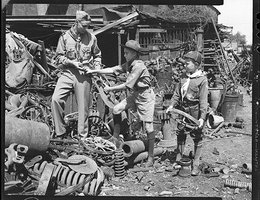 Recent historical studies indicate that the scrap drives were more important as morale boosters than in providing essential products for the war effort. But, the general public did get caught up in the patriotic enthusiasm — some saved tin foil from gum wrappers, making a tin foil ball until it reached a size large enough to be accepted by the collection site. Scrap paper was more easily collected and was used to package armaments. Grease was saved and recycled to make ammunition.

Sometimes they went too far in their collection of scrap metal. Many items were sent to the scrap pile which were later missed, including cannon, monuments, and other historical objects. For instance, a Civil War cannon from Fort Omaha ended up in the scrap pile. Later historians lament the loss of this historic artifact. James Denney was a reporter in Fairbury for the Omaha World-Herald during World War II:

"The World-Herald had started its World War II scrap drive, for which it won the Pulitzer Prize, and Ralph Mears was the state editor, and he called me and said:

‘We’re really looking for pictures, any kind of feature you can come up with, that deals with scrap that could be converted into metal so they can make bombs. We’ll do it because the paper is really getting all behind this.’

So I did a feature with a camera (even then I was taking pictures) in which we titled the story, Fairbury, Here’s Your Scrap. And I went around and, unfortunately — I’ve always kicked myself a little bit about this — one of the things that I proposed as part of our scrap was a cannon we had in the city park that had been used in the Spanish-American War, and sure enough Fairbury gave it up for scrap after I did my story. . . . After the war was over, and I came back, I always had a feeling in my heart, ‘What a dumb thing it was for me to do.’ "
— James Denney, later in the U.S. Army Air Forces, European Theater.

But the impact of the drives on civilian morale was important. In a 1942 scrap drive, newspapers proudly noted that Nebraska produced 111% of its quota and ranked 14th in the nation. Apparently, people felt this was one thing they could do to help the war effort.

Even the U.S. monetary system changed because of the scrap drives. Copper went to war, and pennies made from zinc-coated steel were issued in 1943.

"Lucky Strike green goes to war" said the advertisement. Smokers saw their familiar green packages disappear. The manufacturer said it was because the green ink contained scarce, strategic metals. Skeptics thought it a clever switch to a white package in order to attract more women smokers without offending male customers.

NEXT
Arsenal for Democracy